The beautiful smiles at our practice are principally the work of our consultant trained orthodontist Dr Moira Wong. Dr Wong enjoys improving smiles for children and adults of all ages, providing a high quality, personalised experience to each individual.

Dr Wong qualified as a dentist from the Royal London Hospital Medical College. Following this she gained experience in various teaching hospitals and district general hospitals in the fields of prosthetics, oral surgery, conservative dentistry and paedodontics. She spent time carrying out research at the University of Iowa and published this work in the journal of dental research. She also worked with the Pennstar Trauma team at the University of Pennsylvania, where gun shot victims were treated.

Her specialisation and master’s degree took place at Guys hospital and Bristol dental hospital, where she achieved a Masters Degree and Membership of the Royal College of Surgeons in the Specialty of Orthodontics. She then went on to complete her consultant orthodontic training at Kings College hospital and St George’s hospital in London. She achieved her Fellowship in Orthodontics in 2003. Sharing Smiles Specialist Orthodontic centre was opened in 2005.

Dr Moira Wong is supported by:

Sheriee now works at the practice as a therapist, enjoying treating patients and contributing to the experience of each patient as they journey to their perfect smile.

The practice is in it’s 10th year as a member of the BDA Good Practice Scheme. 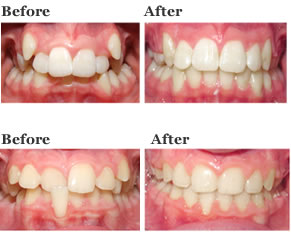 SOME TRANSFORMATIONS THAT CAN BE ACHIEVED WITH BRACES

AT SHARING SMILES ORTHODONTICS, WE SPECIALIZE IN…

Clear ceramic Braces – For many adults who prefer a more cosmetic brace.
Classic Braces Suitable for teenagers with option of colour to brighten up the brace.

Please do not attend your appointment if you or a family member are showing any COVID-19 (Coronavirus) symptoms, are self-isolating, have been sent home from school/college/work to self isolate or are classed in a high-risk category (over 70, pre-existing health conditions such as heart/lung problems, Asthma, Diabetes or Pregnant).

Please only attend at your appointment time so that we can limit the number of people in the waiting area and please only bring one person with you under the age of 60 who will be asked to wait in the waiting room while you are in the Surgery.